I just wanna keep talking, and unless someone stops me I just might. Spoiler alert, this games is pretty freakin' rad. 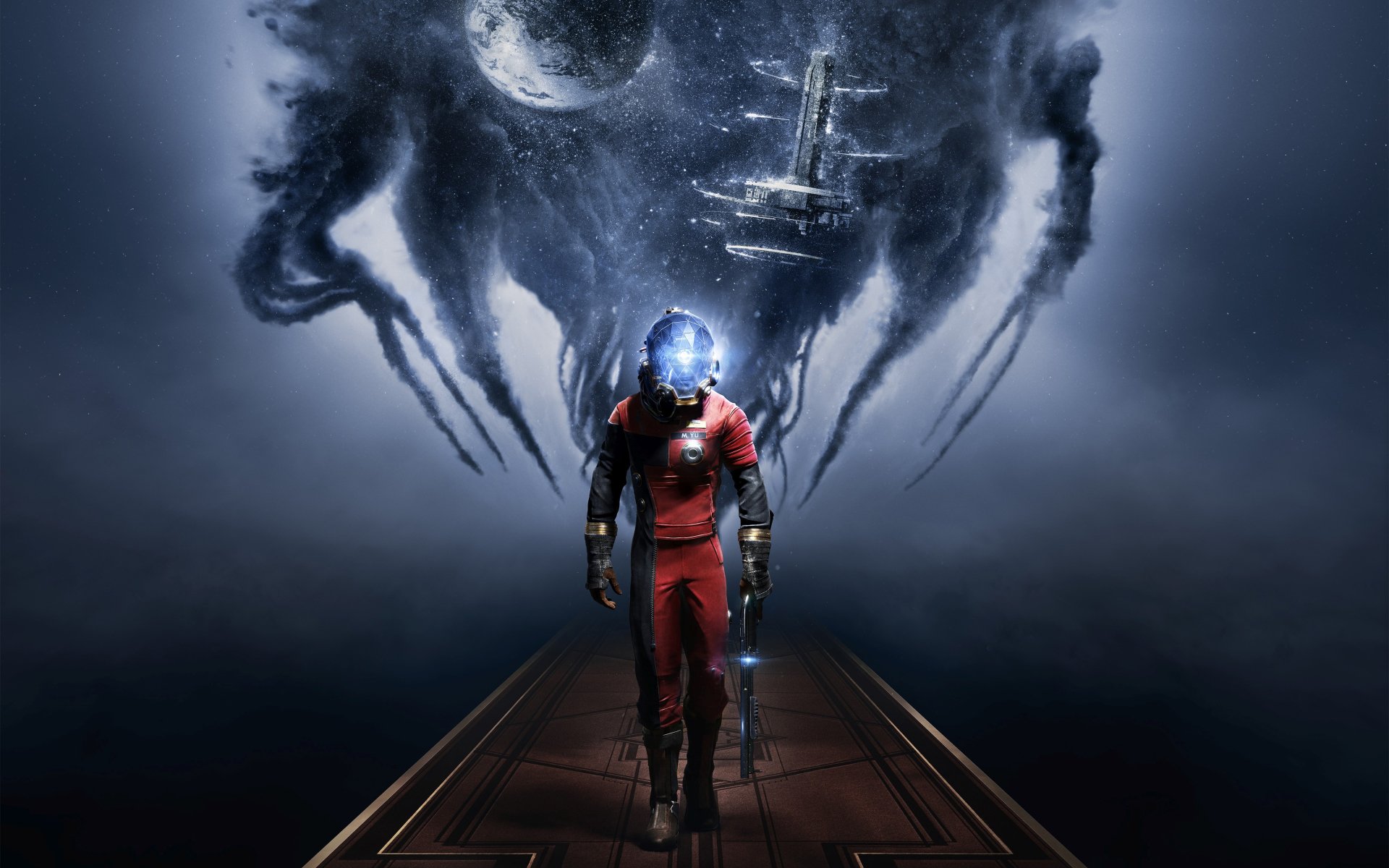 Prey is a sort of psychological, survival horror game made by Arkane Studios; the renowned makers of my personal favourites: Dishonored and Dishonored 2. It combines a lot of different styles of gameplay: crafting, stealth, shooting, strategy, and all in all makes for a really great experience, one that I only found by pure luck.

When Prey was released it completely missed my radar. I'd seen some gameplay, and thought the cinematography and game itself looked cool, but I was never really sold on buying it. Fast forward to mid-July, when I saw a video on reddit clamoring about how good its DLC, Mooncrash was. It didn't make me jump up and buy the game instantly, but it did kinda pique my interest. Anyway, time goes on and the Steam Sale starts and I promised myself that I'd buy Dishonored 2 this sale, even if I still don't have the hardware to support it. Just as luck has it, it has a bundle with Prey which is only like a little bit more than the sale price of the base game so I decided to snatch it up. Honestly, I still didn't have the hardware for Prey (only a 960M), but I still decided to push my luck and installed, and boy oh boy was it LIT.

I mean right from the get go you got cool aliens and interesting combat, and an intriguing story, even with the learning curve. Even the start of the game had me shook to my core. I'd rather not spoil it, but if you've seen any gameplay or anything, the game has a really cool way of bringing you into this world. Eventually you get a hang of it all, the inventory management, the crafting system, the gloo-smack-gloo-smack combos to kill the bigger boys. If I'm just doing some quick overview, I gotta give Prey the points for having fun gameplay, level design, and progression, but man, it could have definitely improved in the backtracking, game-start and ability category. Here, lemme get into it.

The cons first. Backtracking. I am really never a fan of it. I enjoy revisiting areas and having to go do missions in areas which were once difficult, once you got the abilities to light people on fire and a minigun strapped to your hip, but repeating the same four rooms over and over is needless. I get it, in Prey you're on a space station, the 'Talos 1', what kinda variety am I to expect? That's fair, but I just wish that it didn't involve travelling for the bulk of some of the missions. I often found myself just having to sit through a loading screen, to run to another area, and sit through another loading screen (and maybe my hardware isn't the best but this took like 3-4 min every time).

Another one of my complaints is about the start of the game. Without any abilities, or anything its a pretty powerless feeling you get right out the gate. I'm a masochist though, and play things on the hardest difficulty, so I chalk the water pistol up to that, but I really felt like I kept wanting a better gun, and I just never got it. When I finally got the shotgun, I'd run out of ammo almost instantly which always forced me to modify my play style; to sneak, to gloo-smack-hide-repeat; or to just avoid that area. This complaint kinda leads into the ability tree problem, which is definitely my biggest issue. I like feeling overloaded at the end of the game. Even if I don't get every ability, I want most, or at least to experience most of them. Test their strengths and weaknesses so I can better prepare for the next playthrough. Prey, however, doesn't really let you do that. Neuromods are a rare eye-stabby tool which aboard the Talos 1, give you special abilities, and there are not nearly enough of them compared to the demand of the tree. I spent so many crafting materials just making them, thinking I'd be ahead of the curve compared to players who just rely on finding them, but lo and behold I still only felt like I experienced 40-50% of the abilities. Certain essential skills like Repairing, or Hacking drain like a billion neuromods, which forced me to budget my spending on things like Telekinesis and Mimicry. I just wish the abilities were less expensive. :(

NOW FOR THE GOOD STUFF. EEP THE GAMEPLAY. Once you get into the thick of it, the gameplay is phenomenal. You will go from room to room sneaking past some, shooting at others, creating spires of fire for a group and electrocuting others seamlessly. Switching between and combining the tools at your disposal super easily. Every tool you get shines in a different use case; the recycler grenade is great for crowded areas, but the nullwave transmitter shines in one-on-ones with bigger enemies. Combine either with some Typhoid abilities (Psychic, Fire, or Electric) or just an upgraded pistol/shotgun and you can deal with enemies easily (so long as you have the mana for it). Every area will vary the enemies (robots, typhoid, mind-controlled humans), movement (gravity, multiple paths, verticality), and the environment (explosive canisters, flammable spills, broken doors/junction boxes) in different ways to let you, the player, experiment with your play style, and I love it when games do this. The level design is perfectly suited for this, and to be honest I expect nothing less from Arkane. After Dishonored, I've never known just how expansive linear level design could be, and they definitely hit another home run with Prey. If you can't access an area because you can't lift heavy boxes yet, or hack the door, or whatever, Prey lets you stack some oxygen tanks and use a bullet to blow your way in, or just use your upgraded agility to jump your way in. It rewards you for finding your own path, instead of punishing you with invisible walls and death barriers like linear games.

Even the level progression is rewarding. Each new piece of equipment is unique for it's own task. Prey doesn't give you grenades, sticky grenades, and bouncy grenades to let you do the same thing in three different ways. Instead Prey will give you an equipment belt of items for you to test out, most of them being non-lethal. Initially, they seem difficult to use, and pointless since they don't do damage, but by the end of the game you can expect to expert the situational benefits of each item, and combine them in some twisted ways. You can even place each item as a mine, to let you spring a trap on enemies, taking them out in quick succession!

Man, this review went on. I don't know how to stop when I get so invested in a game, I just wanna keep talking. Anyway, to summarize, while its faults are there, and there's a rough start, any playthrough of Prey will be immensely rewarding and totally worth your time, so I recommend it to anyone in the mood for action/adventure with just a few spooky bits. :)