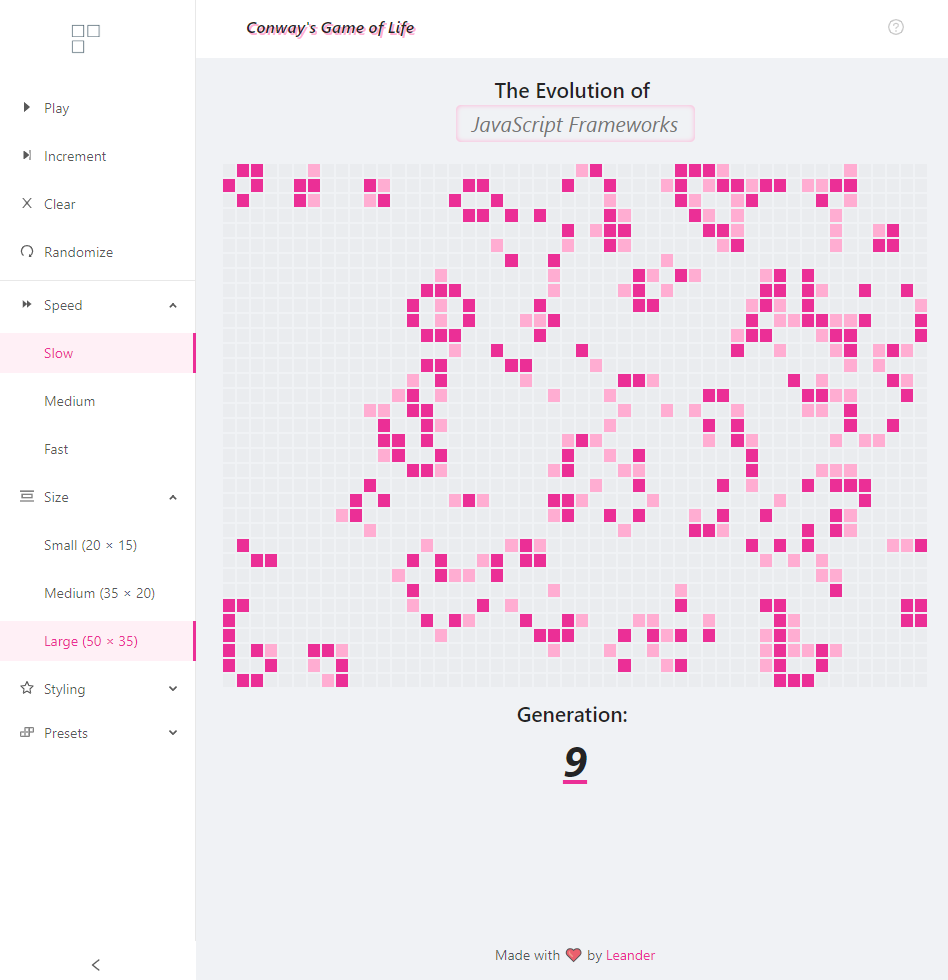 This is a single-page application I built to simulate Conway's Game of Life. You can check out the live demo over at conway.leander.xyz.

This simulation app models the 'zero-player game' which serves more as a evolution/mathematics model than a real game. In essence, a rid contains cells which can either be living (colored) or dead (blank). Each cell's neighbors are specified by the surrounding 8 cells (think of a furnace in Minecraft). Next, the board evolves, with the next generation adhering to 4 simple rules:

The game doesn't have an ending, since eventually the board becomes relatively stable and following generations change less and less, but the main point is to be able to visualize how the ecosystem evolves!

The algorithm running the game does pretty much all the heavy lifting here. Simply sit back and watch your simulation run however you specify. On the left, there's a navigation menu containing a few settings you can play around with.

Above the divider are the management options. The ability to play/pause the simulation, as well as clear, randomize it. The increment feature works best when paused, letting you track each generation individually. You can even click on individual tiles to toggle between alive and dead cells.

Below the divider are the configuration settings. Things like board size, and evolution speed will let you choose how you visualize the evolution. The presets load some boards I made myself, might be interesting to watch.

You may also notice the label above the board with some italicized text. That's actually just a dummy input for naming your simulation, so you can type whatever you like (I randomized it's defaults a bit, let me know if you think I'm funny).

This app was developed to work completely locally, reaching for no external resources. It was developed in React and uses Redux for passing data around. Webpack was used to package the application and keep it fast and efficient.

As for the UI, It was developed with the help of Ant.Design, a popular UI design language for React. Some of the custom styling was done with the help of Sass, and node-sass for hot-reloading in development.